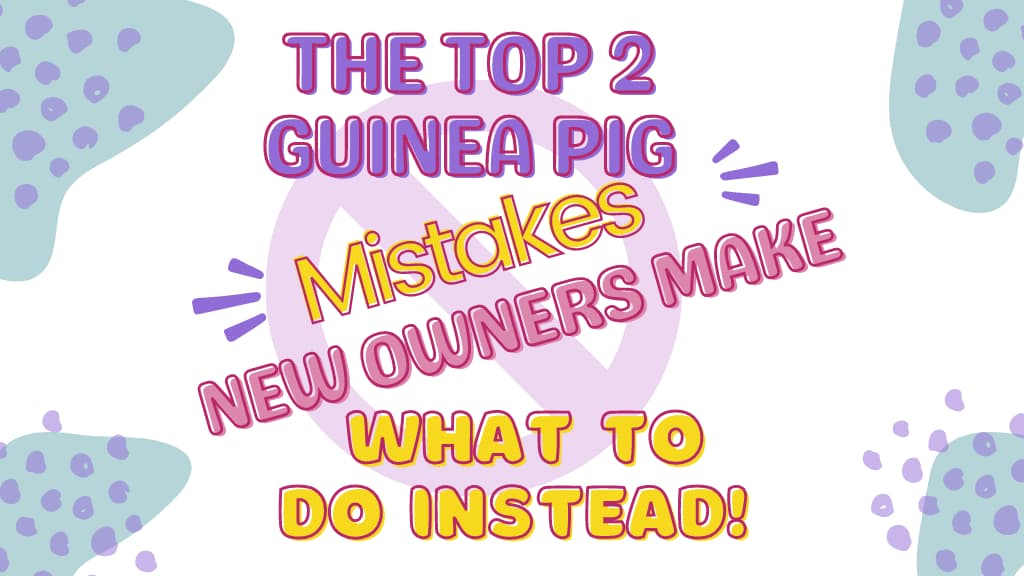 I’ve seen my fair share of Guinea Pig mistakes being made by new owners. I’ve even made some of them myself. So, before deciding to bring your first Guinea Pig home you’ll want to be aware of the two most common mistakes and what to do instead.

The first mistake can result in sadness and depression for your Guinea Pig. Nobody wants a sad piggy.

While the second mistake could end up costing you the most money in the long run. Yes, Guinea Pigs can get expensive real quick!

Because of this, I want to cover these common piggy faux pas right off the bat so you can avoid making them yourself. This will help you start off on the right foot towards new Guinea Pig ownership and potentially save you heartache and money.

You want happy healthy piggies and you don’t want to go broke in the process, right?!

Mistake #1. New Owners Get Only One Guinea Pig

This is probably the most common Guinea Pig mistake I see. And it’s no wonder, because some places like pet shops, rescues and owners sell or adopt out single piggies all the time.

They often do this without advising the new owners that it’s ideal to keep Guinea Pigs in same-sex pairs or small herds. I’m not saying all pet retailers are guilty of this, but many are and this is why it’s the biggest Guinea Pig mistake I see.

Why is having just one Guinea Pig a Mistake?

Simply put, Guinea Pigs are herd animals. They naturally live together in small groups in the wild. They do this for safety, protection, socialization and to establish a hierarchy. This translates to domestic furry potatoes too!

By keeping a single Guinea Pig you are robbing them of the chance to form a bond and relationship with their own kind. This can lead to a sad and lonely piggy.

Yes, you can be sure to take them out and cuddle them often, but there is no substitute for the connection and safety they feel when they live with another piggy.

Humans just don’t speak their language. And people can’t mimic the social behaviors of a Guinea Pig to make up for the lack of a buddy.

Of course, there are exceptions to this. Some Guinea Pigs may have past trauma or be too aggressive around other piggies which may make it more difficult to bond them with another Guinea Pig. But, this situation isn’t very common.

More often, you can witness them happily rooting around in their hay together in search of the perfect blade of grass. Or, you can hear them chuttering and chatting amongst themselves while they play chase around their enclosure.

It’s also super cute to watch them take naps in their favorite hiding spots with their back legs kicked out like a frog.

In our house, we call this “Guinea Pig TV”. It’s quite fun to watch!

So, please consider adopting a pair of same-sex Guinea Pigs to ensure they don't get lonely or sad.

Is a pair of male or female Guinea Pigs better?

Something to keep in mind is “two is a pair and three is a crowd” for boars (male Guinea Pigs). So, stick to a pair of males for the best chance of bonding.

A third boar isn’t always welcome and it can disrupt an existing bond between two boars if a third one is introduced. This could mean you’d end up needing three separate cages for each male and that’s not an ideal situation.

Not to mention how much more space three cages will take up vs just one large cage.

If you want a Guinea Pig herd then choose the ladies!

Sows (female Guinea Pigs), do great in trios and small herds of two or more. They typically get along well once they establish their pecking order.

That’s not to say that female Guinea Pigs never squabble, because they do, and it’s totally normal. They will chase, hump, and engage in “pee fights” just like males but they usually work it out on their own.

If you’re lucky enough to have a neutered male, then he can help keep the peace amongst the ladies!

But, be sure there is only ONE NEUTERED MALE to a herd of females.

Adding two neutered males to a small female herd will cause the males to fight for dominance. It can get ugly and end in serious injury or even death. Please don't do this.

QUICK TIP: Avoid having a singleton – one Guinea Pig. If you want happy healthy Cavies (another name for Guinea Pigs) give them a friend to keep them company!

Mistake #2. Misgendering or Being Told the Wrong Sex of Your Guinea Pigs

As I mentioned earlier, this is one of the most costly mistakes I see being made by new Guinea Pig owners.

Unfortunately, people unwittingly put male and female Guinea Pigs together ALL THE TIME!

They’ll adopt a pair of “same-sex” piggies only to find out later that they accidentally got one of each gender!

In fact, this Guinea Pig mistake happened to me. You can read more about our “pigtastrophy” if you’d like. That’s how we ended up with Pip and Oswald! But, I do believe in “happy accidents”.

How can you tell if a baby Guinea Pig is a male or a female?

You can see what I mean in the pictures of baby Pip (female) and baby Oswald (male) below.

Determining the sex of young Guinea pigs can be difficult!

I recommend checking a young pup’s gender (baby Guinea Pig) around 2 weeks of age. And again about a week later, just to be sure. Checking the gender any earlier can lead to misgendering unless you really know what to look for.

Their private bits look very similar especially since young males' testes haven’t begun to descend yet. There are no visible “balls” to help tell the difference! This makes it much less obvious when males are young.

Shockingly, females can reach sexual maturity as early as 4-6 weeks of age. A pregnancy in a Guinea Pig this young can be very hard on their little bodies. It's sad to see babies having babies.

Don't get me wrong, little babies are cute! But breeding is very risky if you aren’t prepared and don’t know what you’re doing. It’s best to leave breeding to the professionals.

So, check, double-check, and triple-check their genders before putting a pair of Guinea Pigs together to avoid unwanted pregnancies.

QUICK TIP: It’s best to confirm a Guinea Pigs gender with a Cavy Savvy vet, a knowledgeable staff member of a Guinea Pig rescue or a seasoned Guinea Pig owner.

Now that you know the top two mistakes to avoid you can get to the fun stuff like deciding if you want boys or girls, naming your new Guinea Pigs, and decorating their cage with all of their favorite things.

If you're on the fence about whether or not you're ready to adopt a Guinea Pig duo or trio, then read The 9 Most Important Questions to Ask Yourself Before Getting a Pet Guinea Pig. This will certainly help you make the best decision for yourself or your family.

If you want to learn more about winning your Guinea Pigs' love and affection then check out 7 Sure-Fire Ways to Win Your Guinea Pigs’ Heart! You will definitely be their favorite person if you follow these tips.

Are you thinking about getting a Guinea Pig? After answering the following nine questions you’ll know whether or not they’re the right pet for you and your family.

You try to do all the right things, but your little spud muffin just isn’t warming up to you. How can you get your furry potato to fall in love with you? The following seven tips will fast-track you straight to your Guinea Pigs heart! And have them eating out of the palm of your hand…literally!

What is the best type of cage for a Guinea Pig? Keep reading as I share five of the most common Guinea Pig cage mistakes. Plus, I’ll give you some quick and easy tips to set up the perfect home for your little spud muffins.

GUINEA PIG FEEDING AND NUTRITION MISTAKES What do I feed my Guinea Pig? I hear this question a lot from new owners. When it comes to feeding your Guinea Pig there are all kinds of conflicting advice found online and in pet stores. So, I completely understand why it can…

Welcome to my little piggy patch of the internet. I’m so happy you’re here!

If you’re looking for simple honest Guinea Pig advice and helpful resources, then you’re in the right place.

I understand how overwhelming it can be trying to figure out how to take care of your guinea pig(s)!

You may have found that they’re not as low maintenance as you were told. And now you’re looking for help!

I was once a total newbie when it came to Guinea Pigs, but now I’m happy to say I’ve learned what to do and what not to do through trial and error, asking lots of questions, and doing tons of my own research.

I want to pass that info along to you and help you on your Guinea Pig journey!

Oh, and if you’re curious as to how my two furry potatoes turned into a herd of six, you can read the full story on my about page.

As an Amazon Associate, I may earn from qualifying purchases. This site contains affiliate links which means I may earn a small fee if you make a purchase using my affiliate link, at no extra cost to you!

My piggies will thank you for the extra pea flakes too! (see below!)

Be your Guinea Pigs FAVORITE person with these Wheeky Pets Pea Flakes. Seriously, mine go bananas over these which helped me bond with them so must faster!

These Oxbow Vitamin C Biscuits are a MUST HAVE for your Guinea Pigs! Mine get one every day to help boost their Vit C levels so they stay healthy! They beg for these every morning.

Spy on your Guinea Pigs!

Save 35% with Chewy autoship!
I NEED these pins!

I am obsessed with NoriStudio's Enamel Guinea Pig Pins! They make great gifts for the furry potato lovers out there too!

SAVE money and buy HAY in BULK! Piggies gobble up lots and lots of hay every single day!

Get The Piggie Box!